The recently enhanced Venezuela exhibit features more than 10 musical genres, fresh content with explanations of region-specific musical traditions, and 12 new instruments from the state of Zulia. MIM curator for Latin America and the Middle East, Daniel Piper, PhD, worked tirelessly with former Museo de la Gaita directors and gaita musicians José “Cheo” Romero and Arcadio Martínez throughout the summer of 2020 to obtain pieces that represent the regional musical culture of Zulia. These acquisitions help to illustrate the fusion of diverse cultural influences within Venezuelan gaita and chimbángueles de San Benito, two of the musical genres specifically highlighted in the display.

“Cheo and Arcadio are not only researchers, but gaita musicians and devotees of San Benito, so it was very personal for them to collect and send these instruments, each bearing part of the souls of cherished individuals from these traditions. Zulianos are very proud of their regional culture, and many would be full of emotion seeing these instruments at such a prestigious global music museum,” says Piper.

Gaita originated in Zulia neighborhood gatherings in the 1950s and is most often heard at Christmastime. The genre fuses African, indigenous, and Spanish influences to create improvised songs that reflect the concerns of its performers, including politics, religion, and family. A traditional gaita contained a six-line chorus, alternated with a four-line verse, and was accompanied by the furro (friction drum), the cuatro (a four-stringed guitar), the charrasca (a ridged metal scraper), and the maraca. Other household items could also be used as instrumentation, such as a spoon or soda bottle. From the 1960s to the 1980s, gaita became nationally popular in Venezuela and additional Latin band instruments were later added to tracks in commercial recordings. Of the many special instruments MIM acquired from Zulia, two furro, one from 1959 and another played after 1979 by famous gaiteros Rincón Morales, demonstrate the way the design of this friction drum evolved as gaita ensembles started to record and perform concerts. 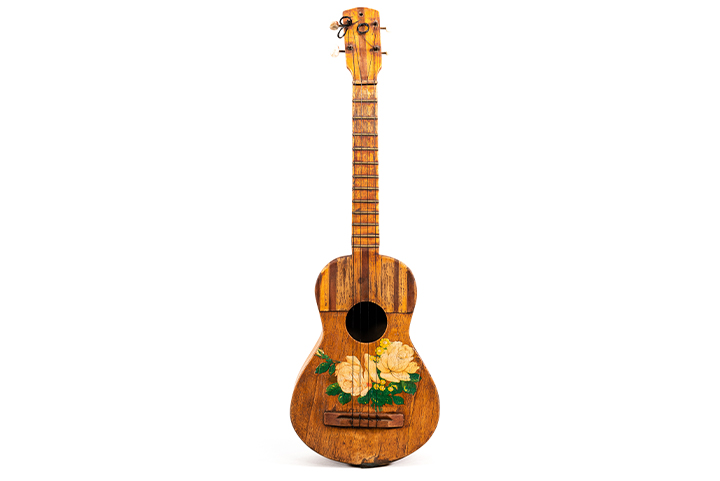 A 1960s cuatro from Zulia used in gaita music

Another prominent musical style in Zulia is chimbángueles, an Afro-Venezuelan genre. African peoples brought to Venezuela as slaves during Spanish colonial times carried musical and spiritual elements from their past lives to their new realities. Descendants in Zulia singing in regional Spanish dialect have reinterpreted this African heritage within the genre of chimbángueles de San Benito. The genre typically features seven drums, four of which are “male” and three “female,” as well as a regional flute and maraca. The instruments are played at the feast of Ajé-Benito and at other religious celebrations. San Benito is a local patron saint in Zulia, while Ajé is a deity from the Dahomey Kingdom (present-day Benin). A maraca that belonged to Olivia López, a renowned singer of both the gaita and chimbángueles genres, as well as an unpainted pair of drums—the two largest of the seven played for the feast of San Benito, reserved for ancestral rites—are just a few of the instruments on display at MIM that offer a direct experience with musical diversity in Venezuela.