How a family heirloom inspired a meaningful gift to MIM

Tom Harvey, a volunteer team member and dedicated MIM supporter, remembers his parents’ love for piano music as central to their lives.

“Their love of classical piano music is what brought them together,” Tom says. “They had two grand pianos in their living room. Sometimes we’d get them to play duets on both pianos.” 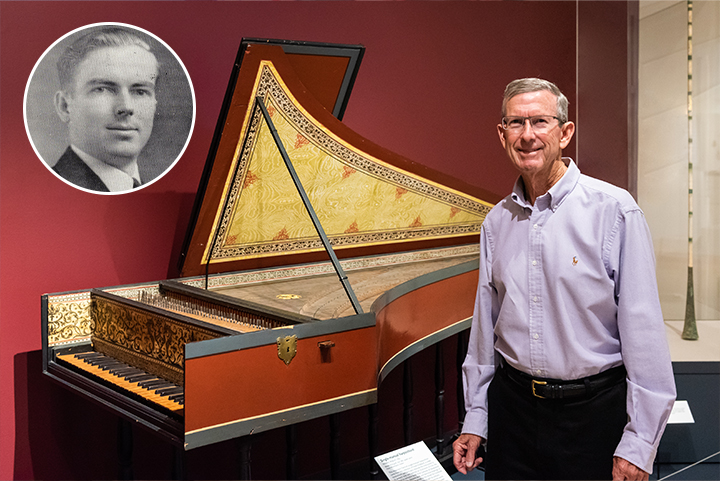 When Tom’s father, Wirt Turner Harvey (inset), built a harpsichord about 50 years ago, he created a family heirloom that he would pass down to his children. Tom recalls the care with which his father constructed the instrument from a kit by noted maker Frank Hubbard.

“My father even did the paint finish using paint brushes, then hand-sanding and rubbing the paint between coats, just like it would have been done back in the 1500s or 1600s,” he says.

In memory of his father and inspired by the family harpsichord, Tom became a Flagbearer in November 2021, supporting MIM’s 1584 Flemish harpsichord, which has been on display in Treasures: Legendary Musical Instruments for the past year. Hubbard restored MIM’s harpsichord in the early 1960s.

“Even though my father was never at MIM, as he passed away before MIM opened, his name is now in the museum,” Tom says.

In addition to giving support as a member and Flagbearer, Tom believes that volunteering is another meaningful way to celebrate his parents’ legacy.

“I also feel that had my parents been alive when MIM was built, both of them would have served as volunteers here in some capacity,” he says, “so part of what I do gives me another chance to remember my parents and their interest in music.”

Explore ways to give that are meaningful to you: MIM.org/support-mim