With exhibits covering every country in the world, MIM’s ever-changing galleries are constantly updated to give guests a new experience during every visit. The Democratic Republic of the Congo exhibit, the largest in the Marc Leo Felix Africa Gallery, has been reorganized to display the instruments geographically, taking guests on a comprehensive journey across the Congo.

“The Congo is the second-largest country in Africa, almost a quarter the size of the United States, with about 250 ethnic groups and 200 languages,” says Manuel Jordán, MIM’s deputy director and chief curator. “The new geographic organization of the display allows guests to see how ideas and musical instruments move from one place to another and transition through culturally related zones with shared histories.”

The success of MIM’s special exhibition Congo Masks and Music: Masterpieces from Central Africa sparked the change. The exhibition organized its objects by stylistic zones, emphasizing unique traditions and connections between peoples.

The new layout of the Democratic Republic of the Congo exhibit works similarly. By arranging objects by place of origin, contextual use, and closely associated traditions, the displays reflect the country’s landscape.

Unique instruments are easily recognizable, such as the 19th-century footed drum of the Kongo people, which is a symbol of political power and depicts a ruler on a throne atop an elephant. The intricately carved drum is one of nearly 100 instruments on loan from the AfricaMuseum in Tervuren, Belgium. The loan helped shape not only the Democratic Republic of the Congo exhibit but the Africa Gallery as a whole.

The display’s geographic format also gives guests a new way to see how these instruments tell many different stories within a culture. The many harps on display, for example, are used under various circumstances—some are simple instruments played by traveling performers spreading songs and news, and some are more elaborate examples exclusively played for chiefs and royal courts. 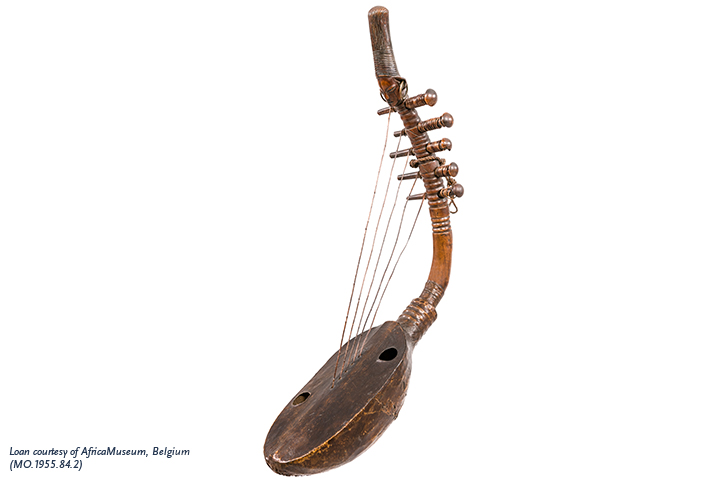 This prestigious kundi (arched harp) of the Mangbetu people has a sculptural depiction of a chief or notable ancestor.

The updates to the Democratic Republic of the Congo exhibit also moved the freestanding African Art display near the center of the space, which helps guests observe the intricate details of the display’s figures and masks from every angle. MIM founder Robert J. Ulrich and Diane Sillik regularly visit museums around the world, sharing an affinity for art and world cultures through appreciative and discerning eyes. Their personal collection includes many world-class African sculptures, some of which are featured at MIM. The African Art exhibit shares a fuller picture of African culture by helping guests draw connections between the sculptures and the surrounding instruments. 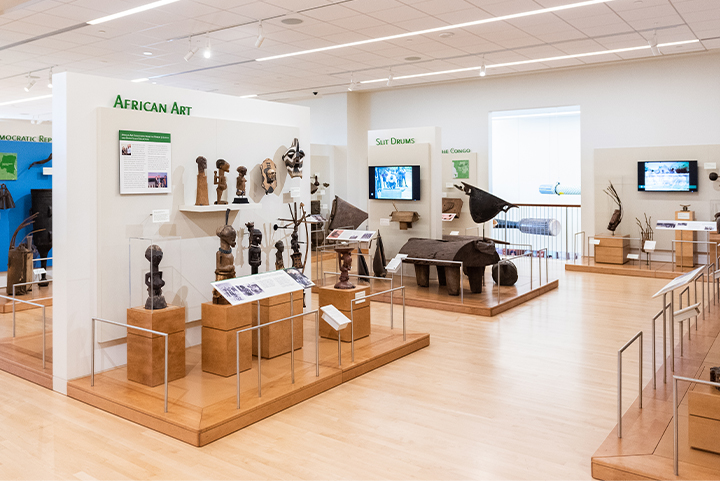